“When we set up a house, darling (honeysuckle porch, yew clips hedge, bees, poetry and eight shillings a week), I think you will have to do the shopping. Particularly at Felixstowe. There was a great and glorious man who said, ‘Give us the luxuries of life and we will dispense with the necessities.’ That I think would be a splendid motto to write (in letters of brown gold) over the porch of our hypothetical home. There will be a sofa for you, for example, but no chairs, for I prefer the floor. There will be a select store of chocolate-creams (to make you do the Carp with) and the rest will be bread and water. We will each retain a suit of evening dress for great occasions, and at other times clothe ourselves in the skins of wild beasts (how pretty you would look) which would fit your taste in furs and be economical.

“I have sometimes thought it would be very fine to take an ordinary house, a very poor, commonplace house in West Kensington, say, and make it symbolic. Not artistic – Heaven – O Heaven forbid. My blood boils when I think of the affronts put by knock-kneed pictorial epicures on the strong, honest, ugly, patient shapes of necessary things: the brave old bones of life. There are aesthetic pattering prigs who can look on a saucepan without one tear of joy or sadness: mongrel decadents that can see no dignity in the honourable scars of a kettle. So they concentrate all their house decoration on coloured windows that nobody looks out of, and vases of lilies that everybody wishes out of the way. No: my idea (which is much cheaper) is to make a house really (allegoric) really explain its own essential meaning. Mystical or ancient sayings should be inscribed on every object, the more prosaic the object the better; and the more coarsely and rudely the inscription was traced the better. ‘Hast thou sent the Rain upon the Earth?’ should be inscribed on the Umbrella-Stand: perhaps on the Umbrella. ‘Even the Hairs of your Head are all numbered’ would give a tremendous significance to one’s hairbrushes: the words about ‘living water’ would reveal the music and sanctity of the sink: while ‘Our God is a consuming Fire’ might be written over the kitchen-grate, to assist the mystic musings of the cook – Shall we ever try that experiment, dearest. Perhaps not, for no words would be golden enough for the tools you had to touch: you would be beauty enough for one house…”

“… By all means let us have bad things in our dwelling and make them good things. I shall offer no objection to your having an occasional dragon to dinner, or a penitent Griffin to sleep in the spare bed. The image of you taking a sunday school of little Devils is pleasing. They will look up, first in savage wonder, then in vague respect; they will see the most glorious and noble lady that ever lived since their prince tempted Eve, with a halo of hair and great heavenly eyes that seem to make the good at the heart of things almost too terribly simple and naked for the sons of flesh: and as they gaze, their tails will drop off, and their wings will sprout: and they will become Angels in six lessons….

“I cannot profess to offer any elaborate explanation of your mother’s disquiet but I admit it does not wholly surprise me. You see I happen to know one factor in the case, and one only, of which you are wholly ignorant. I know you … I know one thing which has made me feel strange before your mother – I know the value of what I take away. I feel (in a weird moment) like the Angel of Death.

“You say you want to talk to me about death: my views about death are bright, brisk and entertaining. When Azrael takes a soul it may be to other and brighter worlds: like those whither you and I go together. The transformation called Death may be something as beautiful and dazzling as the transformation called Love. It may make the dead man ‘happy,’ just as your mother knows that you are happy. But none the less it is a transformation, and sad sometimes for those left behind. A mother whose child is dying can hardly believe that in the inscrutable Unknown there is anyone who can look to it as well as she. And if a mother cannot trust her child easily to God Almighty, shall I be so mean as to be angry because she cannot trust it easily to me? I tell you I have stood before your mother and felt like a thief. I know you are not going to part: neither physically, mentally, morally nor spiritually. But she sees a new element in your life, wholly from outside – is it not natural, given her temperament, that you should find her perturbed? Oh, dearest, dearest Frances, let us always be very gentle to older people. Indeed, darling, it is not they who are the tyrants, but we. They may interrupt our building in the scaffolding stages: we turn their house upside down when it is their final home and rest. Your mother would certainly have worried if you had been engaged to the Archangel Michael (who, indeed, is bearing his disappointment very well): how much more when you are engaged to an aimless, tactless, reckless, unbrushed, strange-hatted, opinionated scarecrow who has suddenly walked into the vacant place. I could have prophesied her unrest: wait and she will calm down all right, dear. God comfort her: I dare not….”

“… Gilbert Keith Chesterton was born of comfortable but honest parents on the top of Campden Hill, Kensington. He was christened at St. George’s Church which stands just under that more imposing building, the Waterworks Tower. This place was chosen, apparently, in order that the whole available water supply might be used in the intrepid attempt to make him a member of Christ, a child of God and an inheritor of the Kingdom of Heaven.

“Of the early years of this remarkable man few traces remain. One of his earliest recorded observations was the simple exclamation, full of heart-felt delight, ‘Look at Baby. Funny Baby.’ Here we see the first hint of that ineffable conversational modesty, that shy social self-effacement, which has ever hidden his light under a bushel. His mother also recounts with apparent amusement an incident connected with his imperious demand for his father’s top-hat. ‘Give me that hat, please.’ ‘No, dear, you mustn’t have that.’ ‘Give me that hat.’ ‘No, dear – ‘ ‘If you don’t give it me, I’ll say ‘At.’ An exquisite selection in the matter of hats has indeed always been one of the great man’s hobbies.

“When he had drawn pictures on all the blinds and tablecloths and towels and walls and windowpanes it was felt that he required a larger sphere. Consequently he was sent to Mr. Bewsher who gave him desks and copy-books and Latin grammars and atlases to draw pictures on. He was far too innately conscientious not to use these materials to draw on. To other uses, asserted by some to belong to these objects, he paid little heed. The only really curious thing about his school life was that he had a weird and quite involuntary habit of getting French prizes. They were the only ones he ever got and he never tried to get them. But though the thing was quite mysterious to him, and though he made every effort to avoid it, it went on, being evidently a part of some occult natural law.

“For the first half of his’ time at school he was very solitary and futile. He never regretted the time, for it gave him two things, complete mental self-sufficiency and a comprehension of the psychology of outcasts…

“He went for a time to an Art School. There he met a great many curious people. Many of the men were horrible blackguards: he was not exactly that: so they naturally found each other interesting. He went through some rather appalling discoveries about human life and the final discovery was that there is no Devil – no, not even such a thing as a bad man.

“One pleasant Saturday afternoon [his friend]Lucian said to him, ‘I am going to take you to see the Bloggs.’ ‘The what?’ said the unhappy man. ‘The Bloggs,’ said the other, darkly. Naturally assuming that it was the name of a public-house he reluctantly followed his friend. He came to a small front-garden; if it was a public-house it was not a businesslike one. They raised the latch – they rang the bell (if the bell was not in the close time just then). No flower in the pots winked. No brick grinned. No sign in Heaven or earth warned him. The birds sang on in the trees. He went in.

“The first time he spent an evening at the Bloggs there was no one there. That is to say there was a worn but fiery little lady in a grey dress who didn’t approve of ‘catastrophic solutions of social problems.’ That, he understood, was Mrs. Blogg. There was a long, blonde, smiling young person who seemed to think him quite off his head and who was addressed as Ethel. There were two people whose meaning and status he couldn’t imagine, one of whom had a big nose and the other hadn’t…. Lastly, there was a Juno-like creature in a tremendous hat who eyed him all the time half wildly, like a shying horse, because he said he was quite happy….

“Two years, as they say in the playbills, is supposed to elapse. And here is the subject of this memoir sitting on a balcony above the sea. The time, evening. He is thinking of the whole bewildering record of which the foregoing is a brief outline: he sees how far he has gone wrong and how idle and wasteful and wicked he has often been: how miserably unfitted he is for what he is called upon to be. Let him now declare it and hereafter for ever hold his peace.

“But there are four lamps of thanksgiving always before him. The first is for his creation out of the same earth with such a woman as you. The second is that he has not, with all his faults, ‘gone after strange women.’ You cannot think how a man’s self restraint is rewarded in this. The third is that he has tried to love everything alive: a dim preparation for loving you. And the fourth is – but no words can express that. Here ends my previous existence. Take it: it led me to you.” 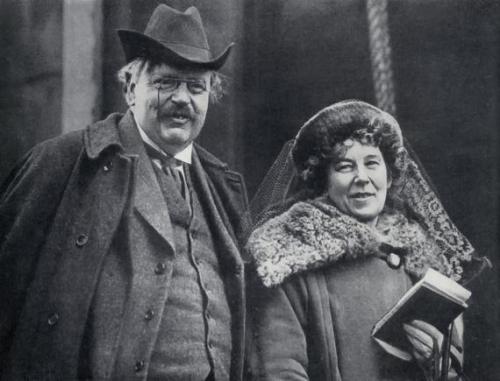 Found here. From a letter Chesterton wrote to his fiance, Frances Blogg, which is reprinted in Maisie Ward’s 1942 biography, Gilbert Keith Chesterton.