When I was a Protestant I didn’t believe in the Real Presence of Christ in the Eucharist (I didn’t even know that was an option), and I also believed the Church very quickly became corrupted after the apostles died. That’s why I “knew” our Baptist church was Christian and Catholics were probably going to Hell — nearly two thousand years of corruption until we Baptists came along finally with the true faith of the apostles. In other words, the Eucharist (we called it communion because Eucharist was too “Catholic”) was only a symbol and, of course, any authentic Christian church had to look like the church of the first generation of Christians (whatever we imagined that to be) if it looked like anything at all. I now know this is a lot of foolish bunk, but still popular in many Protestant circles — although those circles seem to be getting smaller and smaller.

One important piece of evidence for a Church of continuity through the ages is the simple fact that a mere few years beyond the first apostles others made statements about the Eucharist that confirm the Catholic teaching, and those others, lo and behold, where connected directly with the apostles. In other words, the Catholic understand of the Eucharist came directly from the apostles, who got it directly from our Lord.

First some quotes. Consider also the names of the authors and the dates:

On the Lord’s own day, assemble in common to break bread and offer thanks; but first confess your sins, so that your sacrifice may be pure. However, no one quarreling with his brother may join your meeting until they are reconciled; your sacrifice must not be defiled. For here we have the saying of the Lord: “In every place and time offer me a pure sacrifice; for I am a mighty King, says the Lord; and my name spreads terror among the nations.” (Didache, c. 90)

For we do not receive these things as common bread or common drink; but as Jesus Christ our Savior being incarnate by God’s Word took flesh and blood for our salvation, so also we have been taught that the food consecrated by the Word of prayer which comes from him, from which our flesh and blood are nourished by transformation, is the flesh and blood of that incarnate Jesus. (St. Justin Martyr, c. 100)

They [Gnostics] abstain from the Eucharist and from prayer, because they do not admit that the Eucharist is the flesh of our Savior Jesus Christ, the flesh which suffered for our sins and which the Father, in His graciousness, raised from the dead. (St. Ignatius of Antioch, c. 110)

The Word is everything to a child: both Father and Mother, both Instructor and Nurse. “Eat My Flesh,” He says, “and drink My Blood.” The Lord supplies us with these intimate nutrients. He delivers over His Flesh, and pours out His Blood; and nothing is lacking for the growth of His children. O incredible mystery! (St. Clement of Alexandria, c. 150)

Now consider this handy flowchart* I made: 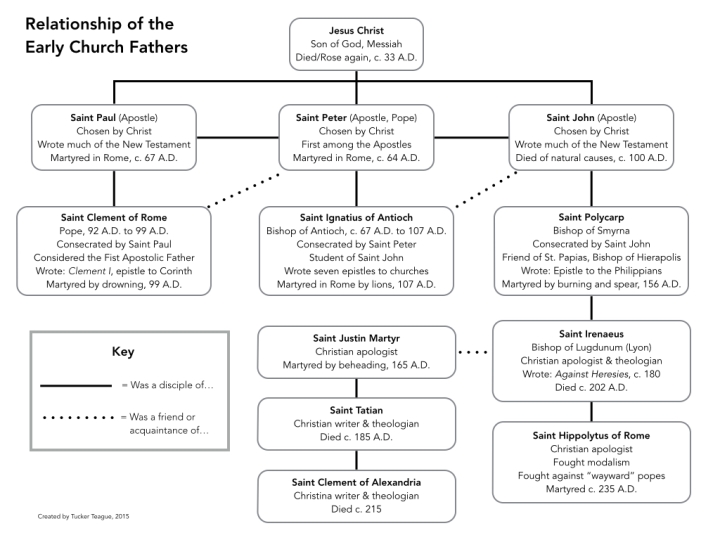 Notice the relationships, see the connections.

Now consider Christ’s words: “And I say to thee: That thou art Peter; and upon this rock I will build my church, and the gates of hell shall not prevail against it.” (Matt. 16:18) Even Hell will not prevail.

It seems to me that the Church has always been a Church of sinners, of struggles, of setbacks, of divisions, but also of healing, reconciliation, and of saints. It has also been a Church of the Eucharist. To think the Church got off course as soon as the apostles died is truly silly. To think the Catholic concept of the Real Presence in the Eucharist is a made-up doctrine that came centuries later is also silly.

“To be deep in history is to cease to be a Protestant.” (Blessed John Henry Cardinal Newman)

*FYI: if I redo this chart I would make the lines between Paul, Peter, and John dotted, or something other than solid lines.