The People of Summorum Pontificum

Archbishop Alexander K. Sample said: “May the traditional Mass flourish in the Church!”

I agree, and I pray every day both for the TLM to flourish and for the archbishop to continue his good work.

In this light, below is another good video from 2SPetrvs:

While watching this video I was thinking about the nature and function of parades. A lot of people like parades. In this video one see a pilgrimage can be a kind of parade. I have come to believe they have an important role to play in human society. There is something old-fashioned about parades. There is also something very human about them. To parade is to make a declaration. Perhaps more parishes should start parading in their cities. 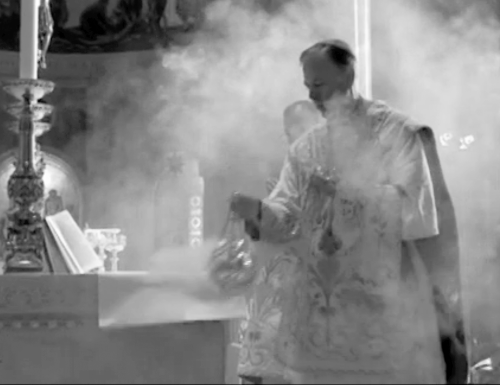 Archbishop Alexander K. Sample of the Archdiocese of Portland, Oregon was the celebrant at an important Mass on April 28, 2018.

This Mass, held at the Basilica of the National Shrine of the Immaculate Conception in Washington D.C., was done according the 1962 Missal, in Latin of course. This form of the Mass is the Roman Rite, but it was in the Traditional Latin Mass form (rather than the Novus Ordo, or Mass of Pope Paul VI of 1969/70, know my most Catholics today, and also of the Roman Rite). The Traditional Latin Mass is also known as the Extraordinary Form, or usus antiquior (older use). This term, usus antiquior, was mentioned by his Excellency more than once in his homily. One key reason for choosing this form was to commemorate the ten year anniversary since Pope Benedict XVI issued his motu proprio Summorum Pontificum. For Catholic traditionalists the motu proprio was a huge event in the recovery of the old Mass and Catholic Tradition, and hence the reason to celebrate.

As I understand it, the Archbishop is not a strident traditionalist, and his homily confirmed that, but he has taken a leading role in promoting the Latin Mass in the United States and elsewhere. Having him celebrate this Mass makes sense. He is also my Archbishop, which makes this rather exciting for me.

This was only the second time since 1969 that Mass has been celebrated in the Traditional Form at the National Shrine. If you did not get a chance to be there or watch it live on EWTN, I’m sure it will be shown again, and eventually made available online. I admit I watched the entire Mass. There was also running commentary, which some might find distracting but I found helpful and not intrusive. I am still very much learning about the Traditional Latin Mass.

Here are some images (screengrabs) from the live EWTN broadcast: 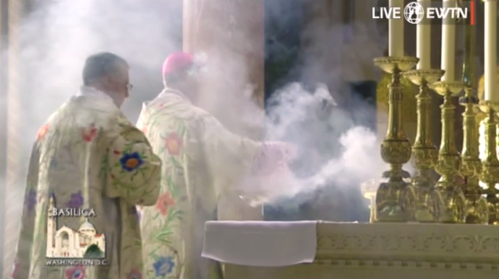 Do not let the Traditional Latin Mass become a source of division — and this goes both ways.

From the YouTube description: “Archbishop Sample’s homily during the 2015 Gregorian Chant conference at the Brigittine Monastery in Amity, Oregon on March 7th.”

“If we do not have love then it’s just a show.”

Some great words from Archbishop Sample. He gives perspective on the Traditional Latin Mass in the Church today. He addresses Summorum Pontificum and it’s importance today. He does not call into question the Ordinary Form of the Mass, but challenges the Church to actually take it seriously and to see the Ordinary Form as inherently connected and informed by the Extraordinary Form. He also sees the TLM as a form that all priests and bishops should know.

From the YouTube description: “On March 1, 2014 Archbishop Alexander Sample of the Archdiocese of Portland in Oregon celebrated a Pontifical High Mass in the Extraordinary Form at the Brigittine Monastery “Our Lady of Consolation” in Amity, Oregon. The Mass was the crowning celebration of a 3-day conference on Gregorian Chant and the role of sacred music in the liturgy.”

The beautiful chant at the end comes via Schola Cantus Angelorum.

Pope Francis facing ad orientem. Perhaps you find this surprising? I do.

Whenever speaking of priests and bishops I don’t really want to say, “He’s one of the good ones,” but I feel that way about my archbishop, Alexander K. Sample. I find him level-headed and wise.

Here’s a talk he recently gave on discovering the Traditional Latin Mass, or Tridentine Mass or, as it’s officially known, the Extraordinary Form of the Roman Rite.

I too have a desire for the Traditional Latin Mass, originally somewhat out of curiosity, and then because I’m sorta studying Latin, but mostly because I want to be holy and I am weak.

That might sound strange, but my thoughts are simple. We are called to be holy. God has given us many gifts and various means to help us become holy. These include prayer and scripture, fellowship and peaching, etc. The Mass is a gift to us. God does not need it, but we do. The Mass was made for us and we are made for Mass. It seems to me, in terms appropriate to reverence before our Lord and Savior, that the more traditional Mass is a better fit with our natures and fundamental human needs than the Novus Ordo Mass, or Ordinary Form. In other words, the more traditional Mass encourages holiness more than the more modern Mass, and I need all the help I can get.

Many will beg to differ.

Those who say they are Christians but not religious are gravely wrong. All humans are religious. Religion, and religious activities, are given to us as gifts. And the religious impulse is part of our DNA, put there by God. Our nature calls out for religion, and for rites, and for reverence. These things really matter. In fact, I think in today’s crazy world reverence is more important than ever. (Side note: It’s like how sexuality is a gift that is meant for a covenantal monogamous marriage context only, and not for a pick-your-own-adventure/buffet-style of anything goes freedom. We are not meant for that kind of freedom. It kills our souls. It doesn’t lead to virtue and theosis.) The Traditional Latin Mass seems to have a great deal more inherent reverence than the more common alternative. And I worry that alternative is slowly killing the Church.

For more of the Archbishop’s thoughts on liturgical reform, here is a two-part discussion he recently did on Mater Dei Radio:

However, the Traditional Latin Mass is not an absolute requirement for the Christian life. It is not an absolute requirement for holiness. And many find the Novus Ordo Mass very encouraging. In fact I do too — I am still in the presence of the Lord, still kneeling, still praying, still receiving His body and blood. But I believe the traditional Mass is a gift that coincides and fits human nature best. There is a fittingness between the Mass of the ages and the design of Man. I would like to have the regular opportunity to receive such a gift in my area. In the Archdiocese of Portland there is a slowly growing number of TLM masses here and there. Where I live it’s limited, especially since I am committed to working within my own parish and seeing what can be done there.

I hope the Archbishop’s views continue to get propagated and accepted throughout the archdiocese. But I know he is wise and will not force anything. It is really up to us to discover it and ask for it. Fortunately for me and my family, our parish, which does not do the Tridentine Mass (yet), is generally very reverent and solemn, frequently includes Latin, and the music is often quite beautiful, and the homilies are good and orthodox. Still, I would love the option, and I pray for it every day.